ROCHELLE — The Rochelle News-Leader has selected Rochelle Township High School seniors Devansh Patel and Zoey Tabor as the winners of the 2021-22 Scholar-Athlete Awards. The RTHS student-athletes will each receive $500 toward their respective college educations.

“We are thrilled to honor Devansh and Zoey for their outstanding academic and athletic achievements during their time at Rochelle Township High School,” Rochelle News-Leader Sports Editor Russell Hodges said. “Both student-athletes have proven to be leaders in and out of the classroom and we’re excited to reward them for their hard work over the last four years. We wish Devansh and Zoey the best as they prepare to begin their college studies this fall.”

Patel finished his athletic career as a four-year bowler and tennis player at RTHS. A two-time Interstate 8 Academic All-Conference honoree in both sports, Patel received multiple awards with the bowling team including the Most Improved Player and Most Valuable Player honors. Patel also spent four years with the RTHS marching, concert and pep bands, performing in the Washington D.C. Parade of Heroes as a freshman during the 2018-19 school year.

A four-year member of the RTHS math team and a two-time state qualifier, Patel was a College Board National Rural and Small Town Recognition honoree for his achievements in the SAT. Patel also spent four years with the Key Club and was a Silver Service volunteer at RTHS. Patel served as the treasurer of the National Honor Society and was on the High Honor Roll. Patel will be attending the University of Illinois at Urbana-Champaign to study aerospace engineering. 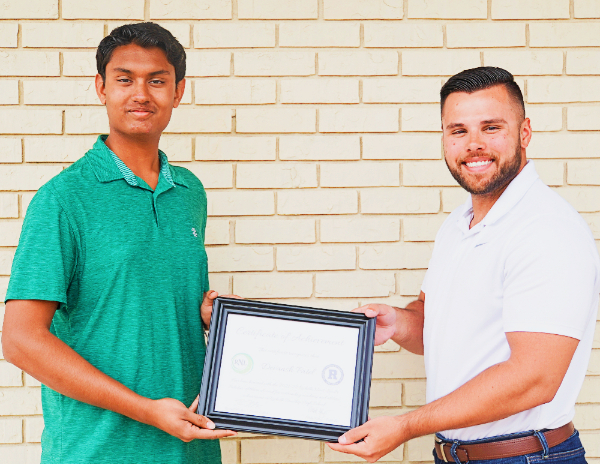 A four-year member of the Hub Power program and a Hub Power Elite member, Tabor spent four years with the RTHS Interact Club and served as secretary. Tabor was also a Silver Service volunteer who served on multiple committees including the Blood Drive Committee, Student vs. Faculty Game Committee and the Destiny Rescue Committee. A three-year member of the FFA, Tabor earned the Top Greenhand Award and attended both the State and National Conventions.